New York based artist Eun-Ha Paek was born in Seoul, Korea. She received a BFA in Film/Animation/Video from the Rhode Island School of Design. Her animated films have screened in the Guggenheim Museum, Sundance Film Festival, and venues internationally. Grants and awards include the Windgate Scholarship and Rudy Autio Grant from the Archie Bray Foundation, a Travel and Study Grant from The Jerome Foundation and the Anna Siok Award from Greenwich House Pottery. Her work has received mentions in The New York Times, Entertainment Weekly and G4 Tech TV. She has been a guest lecturer at Rhode Island School of Design and Fashion Institute of Technology and a visiting critic at Maryland Institute College of Art.

The same way a boulder on a hill stores potential energy, a banana peel on the floor can be the setup to a joke, storing potential “ha-has”. The setup might cause a smirk, without any real action taking place. My work uses this potential to construct narratives on the precipice of the familiar and strange; to explore grief and hope with humor. 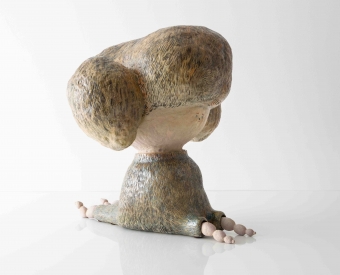