Frida Fjellman is a multi-talented artist and designer living and working in Stockholm, Sweden. Taking inspiration from the Scandinavian eco-system and considering her experience of both its biological and emotional components, Fjellman processes and compounds this information into immersive, fantastical tableaus that are constructed with expert artistry across several types of media in combination, including glass, ceramic, wood and neon. Representing hyper-realistic flora and fauna as well as her own biomorphic and surrealist designs, her installations are vivid, effective and cohesive wonderlands that demand exploration.

Born in 1971 in Mariestad, Fjellman took to working with clay from a young age, attending local ceramics classes with her father. A course at the Community College Helliden with renown Rörstrand designer Inger Persson solidified Fjellman's interest in the medium. The focus of Fjellman's studies later expanded to include courses in glasswork at The Corning Studio in New York in 2000 and in neon at the Pilchuck School of Glass in Washington from 2003-2004.

Fjellman's current projects are a testament to her varied education; her expertly detail-laden sculptures in glass and ceramic are individually hand sculpted or mouth blown. Fjellman's works are undoubtedly strong enough to stand alone, but it is the scope of her tableaus in particular, complete with elaborate decor, that demonstrates Fjellman's proficiency across an astounding amount of media.

At the core of Fjellman's installations are a clear divergence from the subtle minimalism that characterizes most traditional and contemporary Swedish art and design. Fjellman was drawn to these deviating themes and practices out of a rebellious desire to tackle figurative studies, namely the study of animals, because it was considered "tacky and vulgar" and ultimately taboo within the greater artistic community. Fjellman began experimenting with her own perception of the Swedish aesthetic, appropriating and subverting the traditional elements of Swedish design and typified beauty to create highly personal sculptures and installations, which are in many ways evocative of the Northern Swedish landscape.

The environments that Fjellman builds are replete with flora and fauna native to Sweden, however each element of design appears as a hyper-version of itself, refracted in the mind of the artist. Fjellman's sculptures in particular are so intricately detailed down to the palpable expressions of her lemmings, dogs, beavers, bears and ghosts, that they can at times border on the grotesque.  Fjellman painstakingly reproduces the details of each animal's expression and posturing to elicit careful, up-close observation by her audiences with the objective of triggering an emotional response. To this effect, Fjellman creates immersive surrealistic and introspective dreamscapes, with elements keying into latent feelings of joy or terror.

Fjellman's design-oriented installations are a microcosm of her more elaborate tableaus, and they resonate with a more acute and focused emotional effect.  Several of Fjellman's site-specific architectural installations have been designed around the artist's association between the dynamism of cloud systems and the cultivation of thoughts and ideas. In several iterations, Fjellman has produced suspended, swirling and whimsical skyscapes from brightly patterned acrylic glass and neon, which simultaneously represent both the essence and the manifestation of Fjellman's creativity. Additionally, Fjellman has produced a series of prismatic glass chandeliers, another project that plays upon the wonderment of suspended artwork, to the simple effect of creating spectacle: Fjellman, inspired by the form and color emeralds among other gems, formulated that if she created gems of increased size, so too would increase the proportion of the spectacle of these treasures.

Fjellman's diverse and provocative projects executed with impressive versatility across multiple media have made her a standout contemporary artist both in Sweden and internationally. Fjellman has been the recipient of numerous scholarships and awards, and her captivating artworks have been placed in prestigious public and private collections and institutions, including The Nationalmuseum in Stockholm, The Röhsska Museum in Gothenburg, The American Museum of Glass in New Jersey, and notably a cheeky Bichon Frise which Fjelmman calls Alicia can be found to guard the entrance to the Supreme Administrative Court in Stockholm. 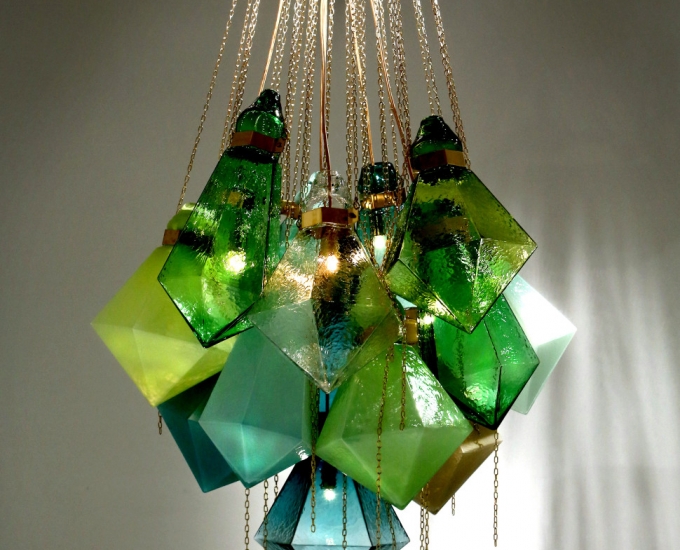 Frida Fjellman
Back To Top