Jasmin Anoschkin is a multimedia artist sculpting primarily in ceramic and wood. She is a member of the Arabia Art Department Society and has exhibited extensively for the past ten years.

Anoschkin’s exuberant aesthetic springs from an amalgam of sources, melding the languages of contemporary folk art, pop culture, and the toy industry. The artist creates naïve sculptures of hybrid animals conjured from her own fantasy world and personal experiences. Her animated sculptures are strikingly fresh in their playfulness, yet they belie deeper qualities confronting issues around diversity and the ways in which “different” beings live in the world.

Jasmin Anoschkin’s breakthrough exhibition and artwork was Bambi, shown at the Mänttä Art Festival in 2009 and also in 2010 at the 100th Anniversary of the Association of Finnish Sculptors in Wäinö Aaltonen Museum of Art. It was subsequently acquired by the Finnish State Art Collection. In 2012, she was chosen to be the year’s young artist in the Satakunta region of Finland. During the years of 2009-2010, she was a visiting artist at the Arabia Art Department Society before becoming a full member in 2014. In the autumn of 2017, her work was published as a series of postage stamps. Her work is permanently on display in the lobby of the Helsinki City Museum. 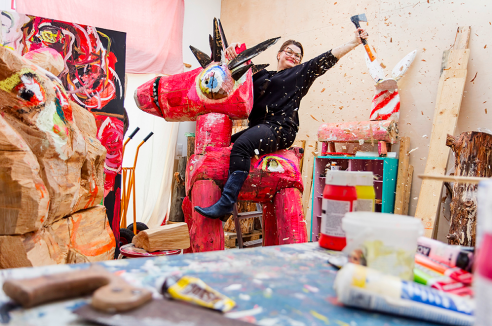