Kristina Riska is one of Scandinavia’s foremost contemporary ceramic artists and a senior member of the Arabia Art Department Society in Helsinki. Riska has been exploring, defying, and redefining the traditional tenets of ceramic sculpture since the 1980’s. Her unorthodox, large - scale works, inspired by nature and the properties of light and shadow, embody her rigorous and physical approach to her work.

Riska begins the conceptualization of her works on paper, her designs ultimately coming to fruition spontaneously as she works. Her process is a foray into the unknown; with each unplanned, instinctive manipulation of the clay, she establishes a non - physical “internal” space. She describes this space as a repository for her qualities of quietude, serenity, and concentration. Her unique ceramic sculptures are astounding in their technical prowess; their impressive scale is matched with equal delicacy; the artist creates forms that seemingly defy gravity and the constraints of the ceramic process. Her craftsmanship is evident as well in the beauty of her glazes, given the limitations of firing such monumental objects in the kiln. 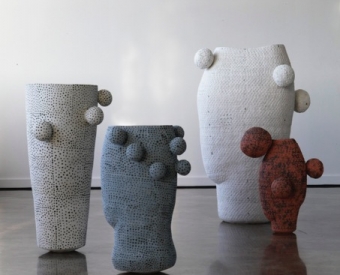