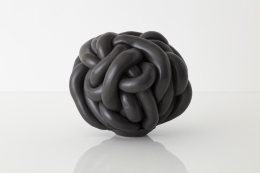 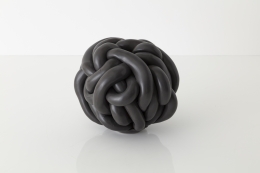 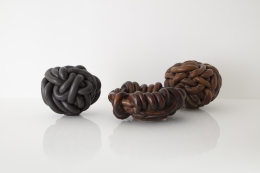 Mårten Medbo is one of Scandinavia’s foremost contemporary ceramic artists. Born in 1964 in Järfälla and educated at the University College of Arts, Crafts and Design in Stockholm, Medbo discovered ceramics at the early age of 10, and has continued to experiment with, challenge and master his material for over four decades. His unique and highly recognizable sculptural objects have drawn international attention, and in 2014 his work was selected to be part of the much celebrated group exhibition FIRE! at Venus Over Manhattan in New York. Curated by Simone and Michaela de Pury, the exhibition helped fuel a resurgence in the field of ceramic art and included works by such renowned artists as Sterling Ruby and Ai Weiwei.

Medbo’s sculptures encompass the qualities of brutalistic, industrial elegance and expressive organic physicality all at once. Many of his abstract forms possess a mysterious aura, at times appearing alive, sometimes even repulsive. The stately vases in Medbo’s most known sculptural series Crowd fascinate and compel the viewer to touch, while also evoking associations to the organic and strange - beautiful abscesses or boils. Unidentifiable creatures, as in the series Lost, exude vulnerability and evoke sympathy, while at the same time arousing discomfort due to their otherworldly appearance. Beauty and disgust, pleasure and pain, purity and dirt, attraction and aversion are all part of Medbo’s artistic territory, where he dismisses dichotomies in order to grasp and communicate life’s limitless essence. The artist rejects being strictly categorized, constantly embracing new aesthetic details and frameworks for his sculptures.

"One of the many tensions found within Mårten Medbo’s practice stems from his use of both abstract and figurative imagery, often resulting in objects occupying a place on the borderline between these two categories. We are confronted with forms and structures that are not fully figurative, but neither abstract. Among the artist’s ceramic and glass pieces, there are numerous examples of works having a resemblance to anthropomorphic or biomorphic structures, without being completely identifiable as such. The vessels and sculptures sometimes look as if being suddenly frozen in the process of organic growth or expansion. However, rather than focusing on the repetitive character of organic structures, Mårten Medbo’s work is drawn towards irregularities and idiosyncrasies. The structures seem to be on the verge of breaking free from their inner logic; they loosen up, start to glow mysteriously, or even mutate. Bewildering and sometimes almost creepy, these pieces convey an image of nature running wild. With their references to popular culture’s predilection for evoking the unknown that lurks beneath the everyday, Mårten Medbo’s works fascinate us by virtue of their strangeness and physical intensity rather than by beauty or sophistication." Löve Jonsson, Critic, writer, and head of RIAN Museum of Design.

In addition to ceramics Medbo works in glass and concrete, and has produced several public sculptures in very large scale. Medbo has also created live works, as in 2012 when he conducted a mesmerizing performance at the Gustavsberg exhibition venue. The artist sat in a glass cage making ceramics and throwing vases on a conveyor belt, from which they proceeded to fall and shatter, creating an enormous pile of shards, all that was left of the performance at the end. The symbolism of this piece is simple yet potent, a performance that was not only a meditation on life and human endeavor at large, but also on the fate of an "old fashioned" craft which continues to fascinate and inspire a new generation of ceramic artists pushing the boundaries of the medium.

The artist's works are represented in the National Museum in Stockholm and Röhsska Museum in Gothenburg, John Michael Kohler Art Center USA, The Icelandic Museum of Design and Applied Art, The Swedish Art Council, Gotland Art Museum among many others. His work has been placed in private collections throughout Sweden, Europe and the United States and he is the recipient of numerous awards and grants in Scandinavia as well as the United States.