Ralph Dorazio (American, 1922-2004) was an American multi-disciplinary artist and part of the New York City avant-garde scene of the 1960s and ‘70s. Born in Detroit, Dorazio landed in New York City after being discharged from military service in World War II. Upon arriving, he began to study painting and sculpture under Arthur Keissler and Jose De Kreeft. While sharing a 23rd street studio with his wife Mary for more than 40 years, Dorazio sustained himself with teaching jobs at Pratt University and the Fabrizio Art School. During that time, he would create a massive body of work across many media and discipline including paintings, unique musical instruments, set and costume designs for theater productions, as well as the modernist sculptures, poetically rendered in wood for which he would become most known. 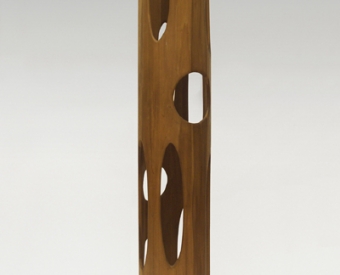