Torbjørn Kvasbø is one of the few Norwegian artists to have a significant international career spanning several decades. In his work, he is constantly pushing against his boundaries and the limits of the material and processes in order to develop his art. According to Kvasbø, “My work process in the clay material offers a lot of resistance, and I get to know more of the forces over which I have no control; the incalculable elements in my inner being. Emotional discharges become embodiment of feelings, and the works become actual experiences themselves.”

His current work is large scale, often monumental. The Stack series involves extruded cylindrical tubes shaped and modeled on top of each other. Based on the archetypal vessel form and what it might contain in our history, it is also a body, a three-dimensional torso with gestures and states of mind. His early works are more classical, household objects in the Western studio tradition, inspired by Asian, particularly Japanese, ceramics.

From 1996 to 2000, Kvasbø was the Professor and Head of the Ceramics Department at the University of Gothenburg, Sweden and from 2000 to 2008, he was Professor and Head of the Ceramic and Glass Department at Konstfack, Stockholm, Sweden. Kvasbø is the President of the International Academy of Ceramics, where he has been a Council Member since 2005. He has been involved with numerous solo and group exhibitions, residencies, juries, workshops and lectures internationally. His work is represented in many museums and collections around the world. He lives and works in Venabygd, Norway. 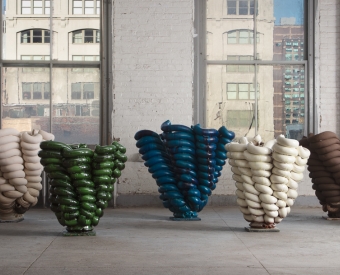