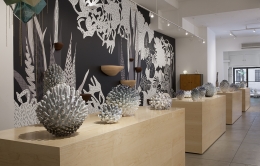 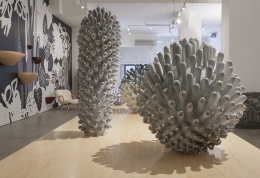 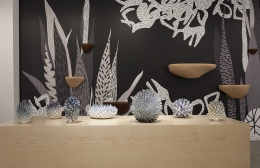 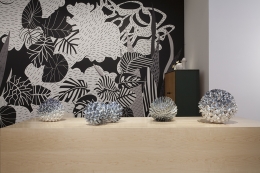 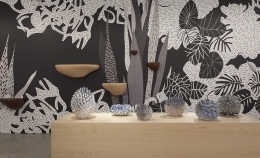 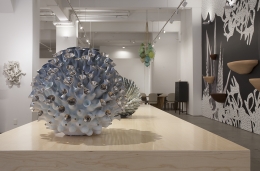 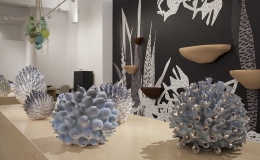 Hostler Burrows is pleased to announce an exhibition of new work by contemporary female artists Amy Kao and Eva Zethraeus. Kao is a Taiwanese-born and Brooklyn-based artist working in vinyl, rubber and ink on paper; Zethraeus is a Swedish-born ceramic artist, living and working in Gothenburg. Both are dynamic in their practices and ideologies, overlapping representation and abstraction while exploring the intricacies and mysteries of nature through light, movement and color.

Kao's presentation consists of a monumental vinyl wall installation, an elaborately interwoven rubber relief work and a suite of highly concentrated ink drawings recalling dreamscapes.  Her work as a whole interweaves densely elaborate motifs, speaking to the visceral experience of nature as well as its impact on history and culture as it endures against the passage of time. The vinyl installation and ink drawings are in part inspired by the themes and contours of traditional scroll paintings as well as the abundance of negative space typically found in Chinese landscape painting where gravity fails to exist. Kao believes her work lies in this in-between or ambiguous space: "They are portals into mannered gardens of exotic fungi, oceanic invertebrates, single-celled organisms, interstellar debris and geometric formations. Interwoven pictorial fragments further heighten the sense of oscillation between perceived imageries and fleeting associations and between representation and abstraction."

In her newest series of work, Eva Zethraeus finds inspiration in the phenomenon of the virus. She is taken with the undeniable beauty of the life cycles of these microorganisms - how a microscopic cluster of genes and proteins can win over a host´s complicated defense mechanisms and, in multiplying, ensure its own survival. Zethraeus is also fascinated by the dual natures of viruses; while some are deadly and create disease, there are those that are capable of the symbiotic merging and evolution of organisms. The artist has obsessed on the idea of replication as it relates to sculpture and pushes the boundaries of technique to create a new language in porcelain, constructing and deconstructing elaborate and intricate forms that capture the complex manner in which natural organisms evolve. Her exquisitely-wrought sculptures are the labors of a painstaking and complicated process, all the more wondrous as the finished works’ organic appearance belies the labors of the artist: "My sculptures are the result of an ongoing research of form and the complicated nature of the ceramic process. Recent focus has been on the Golden Section and my fascination with the Fibonacci Series reoccurring in nature. Behind what seems to be a chaotic universe, everything is created through a secret code. What is harmony and why are some forms more appealing than others?”

Though varied in media and aesthetics, both Kao and Zethraeus draw inspiration from the unpredictable variances of nature through an intensely acute attention to detail within their artistic process. Kao hand-cuts and weaves her installations while Zethraeus turns each component by hand. The meticulous and obsessive patterning in both artists’ work reflects their dedication to their unique visions as well as a strong appreciation for historical ideologies and practices.

Amy Kao was born in Taiwan in 1974. Kao currently lives and works in Brooklyn, New York. With a background in continental philosophy, her work has been exhibited at MoMA PS1, Brooklyn Museum of Art, New York Public Library and Busan Biennial, South Korea, among others. Most recently, Kao completed a site-specific commission at the headquarters of Facebook, Inc. in New York and a large-scale public commission at Brookfield Place and the World Financial Center in New York. Solo exhibitions include Michael Steinberg Fine Art, NY and Venetia Kapernekas Gallery, NY.  Kao is a recipient of residency fellowships at Yaddo, NY; MacDowell Colony, NH; Art Omi, NY and the Lower East Side Printshop, NY.

Eva Zethraeus was born in Sweden in 1971 and raised in the United Kingdom and Spain. She currently lives and works in Gothenburg, Sweden. Zethraeus earned her MFA in ceramic art at HDK School for Design & Crafts at Gothenburg University in 1998. She has exhibited extensively both within Sweden and internationally, completing residencies and offering workshops in the United States, Japan, and Mexico, among others. She has made several public commissions for institutions throughout Sweden. Her work is in the permanent collections of the Nationalmuseum in Stockholm, the Röhsska Museum for Craft and Design in Gothenburg, The Shigaraki Ceramic Park in Japan and the Swedish Embassy in Brazil, among many others. 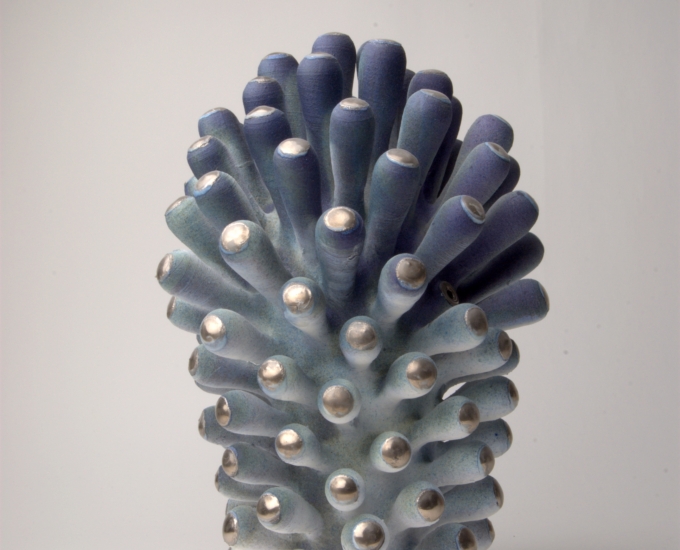 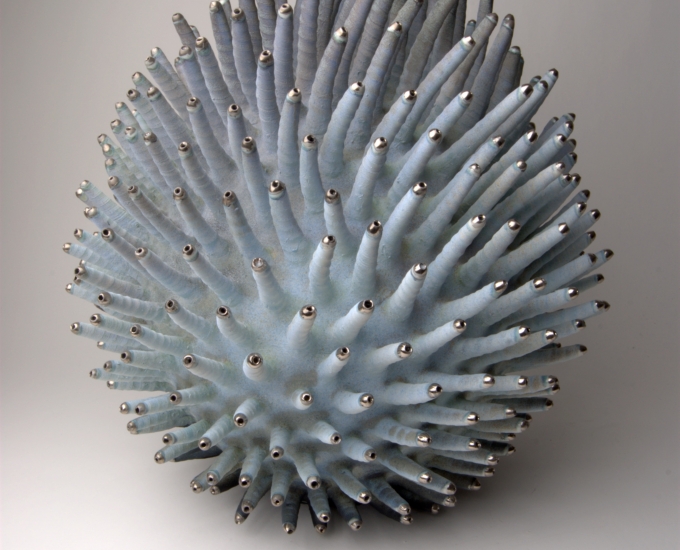 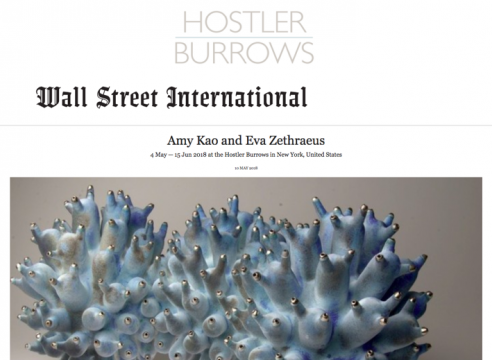 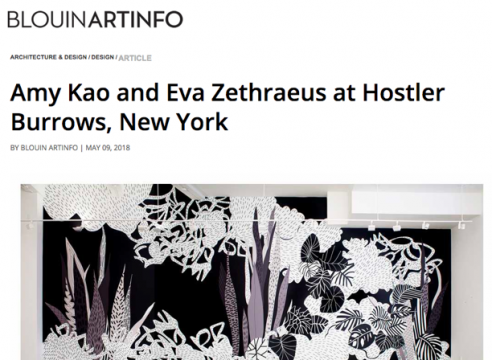