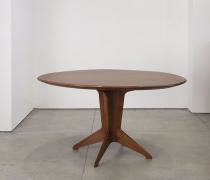 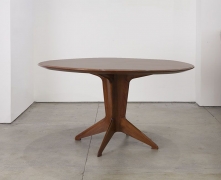 Ico and Luisa Parisi (Italian, Ico 1916 – 1996, Luisa 1914 - 1990) made significant contributions to midcentury Italian design, shaping later generations’ practice through their architecture, furniture, and design work. Initially inspired by the Italian avant-garde and modernist doctrines, Parisi cofounded two architectural groups in the mid-1930s, the Alto Quota and the Gruppo Como. Luisa Aiani was also a student of Gio Ponti and a fellow member of Alta Quota; the pair married in 1947 before opening their design studio La Ruota in Como.

Through their studio, the pair designed architectural projects, interiors, furniture, glass, and jewelry, both independently and as a couple. La Ruota became a nexus for collaborations with artists such as Lucio Fontana, Fausto Melotti, Bruno Munari, and Francesco Somaini. Among the Parisis’ important early architectural collaborations were Casa Carcano in Maslianico, and Casa Notari in Fino Mornasco. Their biomorphic furniture designs for these commissions were acclaimed in Milan and in Domus magazine. The studio also worked with select local artisans, producing furniture, ceramics, glass and jewelry that became important representations of the new Linia Italiana.

As well as designing one-of-a-kind pieces, the Parisis designed lines of furniture for companies like the New York-based M. Singer & Sons as well as Cassina, Altamira, and Mobili Italiana Moderne (MIM). Among their celebrated designs for Cassina are the iconic Model 813 Uovo, or “egg” chair (1951). Presented at the Milan Triennale (for which they designed a pavilion), the chair was lauded by Gio Ponti as “a marvel.”

The Parisis’ long relationship with Cassina led to Compasso d’Oro nominations for Model 691 and Model 839 chairs (both in 1955), and a Gold Medal at the exhibition Colori e Forme Nelle Casa d’Oggi in Como (1957). Characterized by curvaceous wood and metal shapes, in the 50s the Parisis’ biomorphic designs took on a more rationalist architectural bent. Sleeker and pared down, these functional forms combined industrial processes with hand craftsmanship while maintaining their distinctive style. The designs feature curving lines, conveying a sense of movement. The Parisis continued successfully designing for Cassina through the 1980s, producing furniture in their trademark modern style. They also designed over 150 interiors together, as well as architectural works such as the Church of Santa Maria dell’Osa in Tuscany (1962).

In 1973 Ico Parisi collaborated with art critics, a psychologist, and an entrepreneur to create “Hypothesis for an Existential House;” a synthesis of design, installation, and performance, Parisi presented the project at the 1976 Venice Biennale to great enthusiasm by the press and critics. In the late 1970s, he did a series of futuristic architectural drawings entitled Realizable Utopia. He also published his first book on photography, and created installations, including an exhibition at the Pompidou Centre in 1988.

Both the Parisis worked into their final years. Ico and Luisa Parisi are recognized as key figures in mid-century Italian design, and proved a major influence on the successive generation of Italian designers. They effectively combined the tenets of modernism together with Italian expressiveness in creating pieces that are seductively shaped, intelligently manufactured, and elegantly functional.